A battery is among one of power sources that has become one of important resources that man can cannot make up life in its absences.

With experience that there is damage of batteries because of over charging which caused by charging. The system used for particular period of time and hence decrease life span and performance of the batteries.

To reduce damage of the battery due to overcharging of batteries by using charger controller and indicator so as to maintain life span of the battery and its performance.

SIGNIFICANCE OF THE PROJECT.

After the successful completion and implementation of this project following needs ;

LIMITATION OF THE EXISTING SYSTEM.

It cannot protect the battery from overcharging, the existing system consists of the transformer, rectification circuit that changes the secondary voltage of the transformer into DC, filter used for smooth DC output and regulator which supply a stable voltage ready to charge the battery.

It does not contain charger controller for switching on/off automatically. 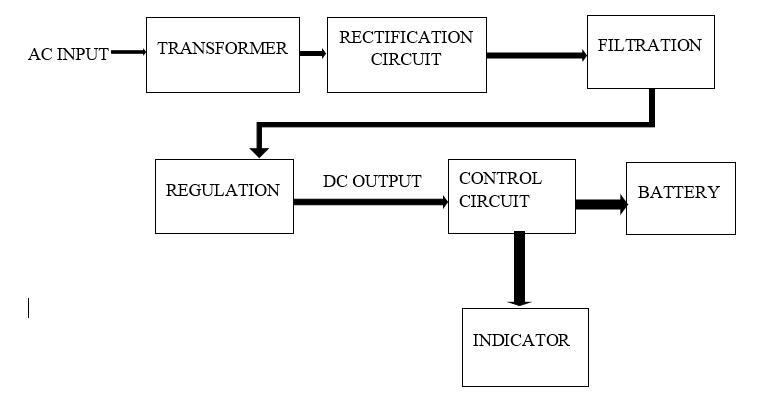 It produces regulated charging current to reduce damage and maintain the life span of the battery.

It protect the battery from overcharging

Knowing for stop but in monitoring section

The design is successfully to ensure provision of quality battery charger used to charge batteries of 12V.The project is to be beneficial to users since the Analysis and Prototype results were exactly the same for charging that provide constant voltage; monitoring while controlling voltage of the level of battery voltage when full charged hence prevents damage of batteries due to overcharging.